Skunk Works: A Personal Memoir of My Years at Lockheed 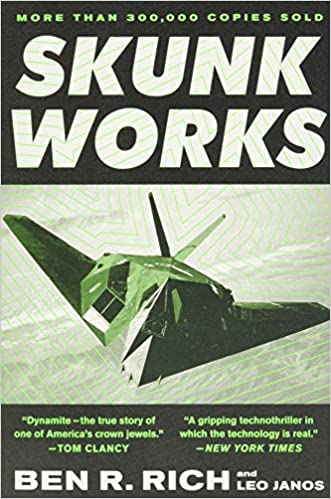 Skunk Works, this was the name of the top secret, World War II, aerospace aircraft design program charged with building the United States government the fastest, stealth and fighter planes of the time. In this biography of the same name, Ben Rich, the second director of the program for over two decades, recounts the efforts of the scientists, engineers, CIA personnel, and Air Force pilots who made Skunk Works into one of the most remarkable and revolutionary aviation companies in military history.

Not only does the book delve into the personal histories and anecdotes of the people involved in the company, along with detailed descriptions of aviation engineering, the book also takes a look at the managerial tactics Ben Rich brought to the company that elevated it to new heights. In this book he discuss the benefits of utilizing techniques such as eliminating bureaucracy, maintaining constant communication, employing a small team with above average talent, and other unique approaches that structured the company to be as efficient as possible.

Remembered as the “Father of Stealth,” Ben Rich’s Skunk Works is an incredible account of the marvels that can be accomplished when a company with a strong leader and passionate employees push beyond the limits of human imagination.