Invisible Women: Data Bias in a World Designed for Men 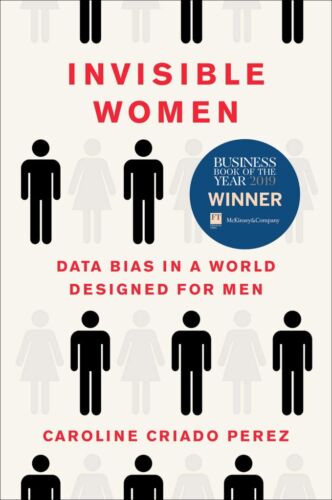 In these modern times, data is essential. We depend on data in all areas of life and count on accurate complete data to make educated decisions in business, as well as, our personal lives. However, what some might not be as aware of is that there is a significant, systematic gender bias when it comes to gathering data. When men are considered the “default” and women are considered “atypical”, women can and do pay the price for this bias in every aspect of life from health care, car design, and even snow removal to health care. Sometimes this bias can even cost women their lives.

Winner of the 2019 Financial Times and McKinsey Business Book of the Year Award and Winner of the 2019 Royal Society Science Book Prize, Invisible Women will open your eyes to the gender bias that has been baked into the system, designed by men, since the beginning.

According to the Times (UK), “Invisible Women is a game-changer; an uncompromising blitz of facts, sad, mad, bad and funny, making an unanswerable case and doing so brilliantly. …the ambition and scope — and sheer originality — of Invisible Women is huge; no less than the story of what happens when we forget to account for half of humanity. It should be on every policymaker, politician and manager’s shelves.”

Author Caroline Criado Perez is an award-winning and bestselling writer, broadcaster, campaigner, and consultant. She won the Liberty Human Rights Campaigner of the Year Award 2013 and in 2015 she was named an OBE (Order of the British Empire) in the Queen’s Birthday Honours.