LikeWar: The Weaponization of Social Media 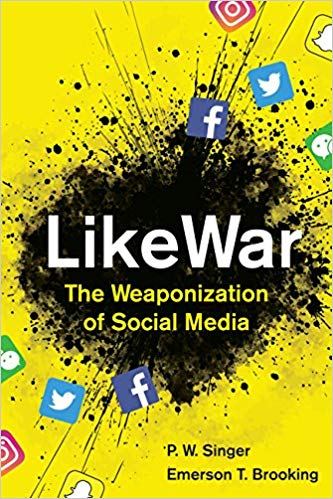 Through the weaponization of social media, the internet is changing war and politics while simultaneously war and politics are changing the internet. Terrorists livestream their attacks, “Twitter wars” produce real-world casualties, and viral misinformation alters not just the result of battles, but the very fate of nations. The result is that war, tech, and politics have blurred into a new kind of battlespace that plays out on our smartphones.

Singer and Brooking tackle the mind-bending questions that arise when war goes online and the online world goes to war. What can be kept secret in a world of networks? Does social media expose the truth or bury it? And what role do ordinary people now play in international conflicts?  Find out when you read LikeWar: The Weaponization of Social Media!